The FBI’s 2016 Privacy Red Herring – Despite What You Read in the Media, Corporations Can Unlock the iPhones They Own

26 Feb The FBI’s 2016 Privacy Red Herring – Despite What You Read in the Media, Corporations Can Unlock the iPhones They Own

I often find myself laughing in regards to the overreactions we make in today’s world, where every opinion can be so easily spread – especially if there is any type of political current. As of late though, my laughing has subsided and I find myself much more concerned. Unfortunately for the majority of us whose opinions’ fall in the middle of the extremes, our voices are typically too quiet and often drowned out.

I write this blog today knowing it’ll probably be read by 10 people, if I’m lucky. But I do it anyway to speak on behalf of the group I feel I fall into and that is the silent majority.

And, because my blog is about Apple in the Enterprise, I want to do my part to inform the businesses that may be unaware, or wrongly informed by the media, that they can indeed get access to the data on the corporate devices they own and assign to employees.

Now, first off, before I get into the method of how to unlock an iPhone, let me express my opinion on this political side of the issue.

I personally believe the FBI’s request to un-encrypt the encrypted iPhone used by Syed Farook, the San Bernardino terrorist, is a red herring. Yes, having access to Syed’s corporate device may prove helpful, but at what cost? The FBI is using this terrorist act as a catalyst to find a way around the iPhone’s encryption for much more than just this single incident. Just look at this article in The New York Times, Justice Department Wants Apple to Unlock Nine More iPhones.

Apple is losing the PR battle on this and they shouldn’t be. This isn’t just about one phone, this is about you and your privacy. Apple is arguing its First Amendment rights regarding this, and we should all be standing behind them.

Think of all of the common individuals, like you and me, that will be put at risk if a backdoor to our personal data were made available by Apple. The FBI will not be the only entity that will eventually have access to such a tool. Even with Apple’s best and brightest working on a solution, nefarious individuals, companies and governments will find a way to use such a backdoor.

Do you remember the LA hospital that was paralyzed by hackers that made the news last week? A backdoor to our phones will only make it that much easier for all of us to have our personal information put at risk and potentially held hostage.

Donald Trump and possibly even Bill Gates disagree with me on this, depending on which report you believe. As for me, I’m against it. In the lexicon of Donald Trump himself, it is such a bad, bad, bad idea.

I place a lot of value on respect – especially regarding my privacy. And I extend that wish for privacy and respect for me, for my family, for my neighbor, for those who also live in the great state of Texas and every other individual that believes in our basic unalienable rights.

The FBI’s use of fear to override our basic rights is not a viable option – especially when the cost is the privacy of millions of individuals. Stewart Brown in his article in The Washington Post titled Has Apple made iPhones illegal in the financial industry? has it wrong, or missed a major piece of the picture. The collateral damage isn’t just a corporation (which can somewhat protect itself), it’s primarily you and me.

The argument here is that the iPhone was issued by the San Bernardino County Department of Public Health and, even although they’re not a financial institution, the law states that all financial institutions “have policies and procedures in place to monitor all electronic communication used by the firm and its associated persons.”

Seriously? We have a law to monitor all electronic communication? Good luck trying to enforce that.

With that, I don’t know the history of the law, nor do I have the full context of the law. It may have good intentions, but it compromises our privacy and puts us at a security risk. Data in motion is encrypted for our own security. We already have enough issues with our data being stolen and misused to think that we should un-encrypt all data so it can be monitored.

Really, this  whole thing is crazy and worrisome. We have laws that make us vulnerable and governments that ask companies to remove what protections we do have. We need to stand up now, before we don’t have the freedoms to protect ourselves any longer.

Luckily for us “commoners,” there are plenty of others that feel the same way we do, both public and private figures.

Now it’s time to discuss how corporations can unlock the phones they own. Apple and Google have put protections in place for corporations, giving them the ability to remotely “unlock a phone.” The caveat is simply that it must be a managed device. Any MDM (Mobile Device Management) vendor can unlock a managed device in seconds.

That’s right, in seconds. My Dad always taught me that with the right knowledge and tools any job can be easy.

Unlocking an iPhone managed by LANDESK Management Suite is literally a two-click process. All you have to do is find the phone in network view, right click on it and select Unlock.  And just like that, the phone’s password, and if applicable, fingerprint protection, will be removed. 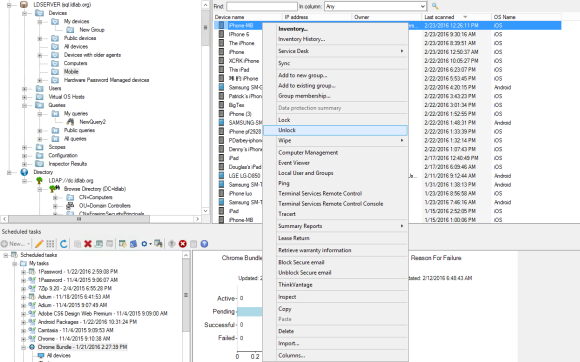 I understand that not every terrorist is going to use a company phone that should be managed prior to a terrorizing event. However, had the San Bernardino County Department of Public Health not neglected its duty to protect itself by managing the devices it assigns out to its employees, we wouldn’t even be having this conversation. The county would have been able to unlock the phone for the FBI, and the FBI would still be trying to come up with some other excuse to tear down our privacy protections.

As a people, both as public and private individuals, we shouldn’t be attacking Apple for having put in place privacy protections for all of us. We should be focusing on the negligence that is putting us in the tough spot to begin with, in which the proposed solutions steal away your own rights to privacy.

This site uses Akismet to reduce spam. Learn how your comment data is processed.